If being black was chocolate ice cream, and being Latina was cherry, the world sees Aviva Ardor as a Swirl of the two when she’s really Red Velvet. After searching for personal connection and understanding, Aviva must accept who she truly is regardless if the world does or not. 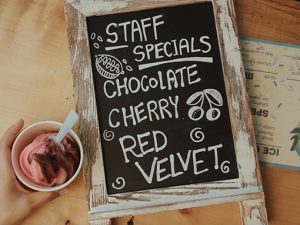 Red Velvet is a highly stylized dramatic comedy that highlights the magic of self acceptance. It follows an Afro Latina woman’s pursuit of societal acceptance when she does not feel fully embraced within the Black and Latino communities. It is a thematic based film that uses ice cream and color as metaphors for race and self identity. The characters talk about the validity and desirability of various flavors, similar to how women of color can be harshly criticized or inappropriately fetishized. By the end, Aviva realizes that her self worth must be self sustained and that she is not ‘two halves,’ but instead a ‘blended’ whole. As an Afro Latina I grew up feeling like I didn’t completely fit into the Black or Latino community and that in order to fit in, I’d have to pick a side to identify as. But that simply is not possible since both ‘sides’ are an inherent part of who I am. I have an immense pride in that and in understanding who I am and how I identify myself. I want to reflect that in this short.

Other works that have influenced the style of Red Velvet include the black comedy short The Saddest Boy in the World by Jamie Travis, for its tone, tempo, and production design; Spike Lee’s Do the Right Thing for its liveliness, boldness, and swag in illustrating its strong themes; and Noah Baumbach and Greta Gerwigs Frances Ha for its unique character definition. Red Velvet also utilizes a touch of magical realism which visualizes the emotional undertones of a given situation, like how Ike and Aviva have an unspoken attraction that is illustrated by how they find a song only they can hear, or when Aviva feels grey in a black and white room that was once in color. I want this film to touch on the hard reality that Afro Latinos face whilst keeping a levity to it through quick pacing, color indication, humor, and visualization of black girl magic through magical realism.