Marci’s White Rabbit follows a young girl who seeks inner peace within a domestically abusive household. This was the first of two of Capstone films Danielle directed in her undergrad. 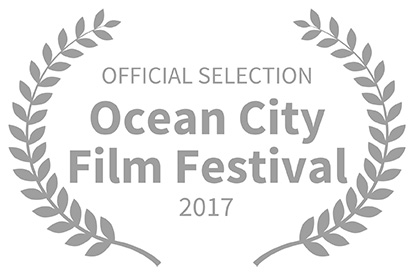 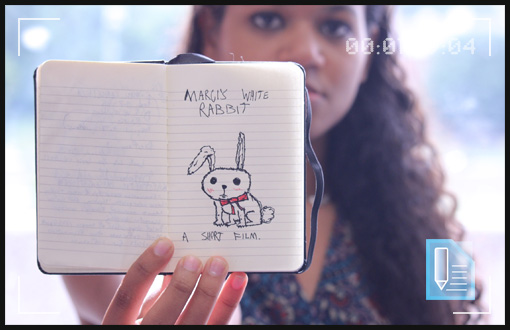 She originally wrote this to make a statement about keeping guns around children, but the story grew too heavy to leave it at that. Now it also makes a statement about domestic abuse, mental health, and their effects on children. 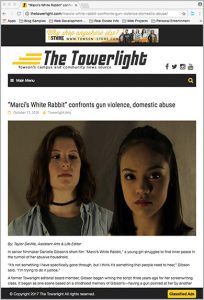 “It’s not something I have specifically gone through, but I think it’s something that people need to hear,” Gibson said. “I’m trying to do it justice.”

A former Towerlight editorial board member, Gibson began writing the script three years ago for her screenwriting class. It began as one scene based on a childhood memory of Gibson’s—having a gun pointed at her by another child because they thought it was a toy.

“I don’t really like guns, especially guns with children. I wanted to make a statement about that, and it kind of took on these other themes,” Gibson said. “When people watch it I definitely expect them to have a reaction, whether or not they like it or they feel for the character, or they’re confused or angry, it’ll get people to talk. The imagery, I hope, reminds people of situations where there’s gun violence and a kid ends up dead.”

“The dad is really abusive to the mom, but the mom’s not a doormat,” she said. “It makes a statement about how we actually listen to children and if we take them seriously or not. I think a lot of people can relate to that.”

The film stars Towson freshman Ann Marie Taglavore as Marci’s stepsister Maddie and 14-year-old Sydney Landers as Marci. Gibson is enthused about being able to cast people of color in her movie and likes that Marci’s diverse family is similar to her own, as Gibson calls them, “Crayola box family.”

“I always wanted to cast minorities in film, because a lot of minorities are portrayed as stereotypes,” Gibson said. “It really meant a lot that we found someone who was amazing for the role. In the story, it doesn’t matter what [ethnicity] they are, but it’s still important that they’re cast as these characters.”

Although Gibson admits that the script was emotionally taxing to write, she is moved by the passion that her team, Producer Allie Lotz, Assistant Director Alex Merzer, Towerlight contributor and Director of Photography William Strang-Moya and the cast have shown for the film.

“Everyone is putting as much energy into it as me. Everyone is really excited and it really means so much that they do because… you’re putting yourself out there in your script, and you’re trying to get other people to believe in it while you might not believe in it yourself and when they do, I just… I want to cry.” Gibson said.

Gibson’s next project will be a personal piece titled “Revelations,” that addresses anxiety, vulnerability and not feeling comfortable in her own skin as a woman of color. She plans to submit “Marci’s White Rabbit” to WAMMFest, Maryland Film Fest and international festivals that feature the work of women and minority filmmakers.

“Marci’s White Rabbit” will premiere at the end-of-semester film screening in Van Bokkelen on Dec. 16. Interested parties can help Gibson reach her goal of $2,500 by donating to her GoFundMe page at www.gofundme.com/marciswhiterabbit.